Michael Collins, revolutionary, born 1890 in Sam’s Cross near Clonakility Co Cork. He left there in 1906 to work in London where he lived and worked for nearly a third of his life.

In 1914 he moved into a flat at 5 Netherwood Road, W14 which he shared with his sister Hannie. A discreet plaque commemorates its illustrious resident.

Around the corner and behind the Olympia Exhibition Centre at 23 Blythe Road W14, is Blythe House, the Post Office Savings bank where he worked until 1910.

Thanks to Katie Walsh for sourcing these gems. 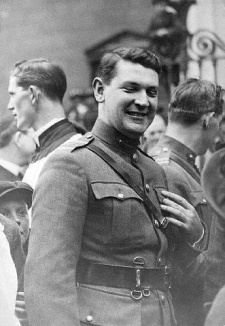